Introducing your new puppy to grooming

Puppies are very much like babies - they are cute, adorable and need a lot of looking after!  Puppies are also very sensitive and need to learn about the world around them and the rules that go with that world.

Every dog is different and their personalities can vary as much as peoples can.

I have had pups as young as 4 months sail through the whole grooming process without a whimper, but equally I've had pups that are very frightened of the whole process.

The grooming salon can be a scary place for a nervous dog.  There's lots of smells, sounds, sensations and it can be very overwhelming.  Dogs that are overwhelmed can get too stressed and can start to snap and bite. I don't want them to get that fearful, as I'm sure you don't. 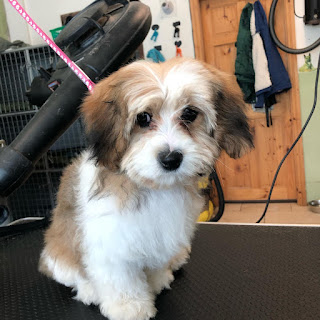 My ideal scenario with anyone with a new puppy is to introduce them to  the grooming salon as soon as they've been fully vaccinated. Even if its just to pop in and say hello. Let the dog have a sniff around the salon, say hello to Larry (the mini poodle). If the pup has a happy first visit, it'll help with future visits.
Now, I know that different dogs have different needs. Some dogs need regular professional grooming (every 6-8 weeks) others will be 3 or 4 times a year, some dogs I see once a year.
There's a lot of new sights sounds and smells in the dog grooming salon.  Theres a lot to get used to...
The bath. The shampoo,  being washed all over. The sound and sensation of the water.
The towel dry, again being touched all over.
The dryer, loud warm air blasted all over.
The table, the brush, comb, clippers, scissors,  nail clippers.
All while being handled, moved around, having to stand still. 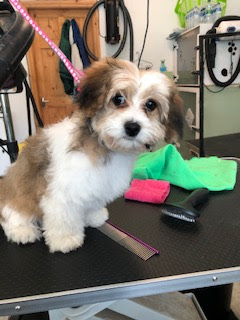 Young puppies get used to things a lot quicker than older dogs. The younger the puppy, the less that has to be done.
For a curly haired puppy 12 - 16 weeks old,  a bath and brush is the perfect introduction to grooming. But if the same dog is left till its 8 or 9 months old, chances are the adult coat has started coming through and matting has started happening around the bum, belly, ears and maybe more. Now the dog HAS to be clipped (shaved).  This is awful for any dog because the mats are pulling on the skin and can be painful. But for the puppy who has no previous experience of the grooming salon it can make the dog fearful of the grooming process.
For a puppy that's going to grow into a large breed like a German Shepherd,  Golden Retriever,  Newfoundland,  Labrador and such, they can be very jumpy, and the bigger they are, the harder they are to keep calm and under control.  So by introducing them when they are small, they get used to the process quicker, so by the time they are bigger they'll be a pro at it. The dryers used for a larger dog are much more powerful than the one used for smaller dogs and puppies. But by getting them used to the noise and sensation of the smaller dryer, they adapt to the bigger one as they get older much quicker than a large dog that's never been groomed before.
So, regardless of the breed of puppy you've adopted into your family, introduction to the dog grooming at a young age is going to help the confidence of the dog.
If you'd like to introduce your new puppy to grooming,  phone me on 08238133238 or call to the salon with your puppy and we can have a chat about their grooming needs.
Posted by For Mutt's Sake, a dog blog. at 1:45 AM

For Mutt's Sake, a dog blog.